The Stylite of Suburbia 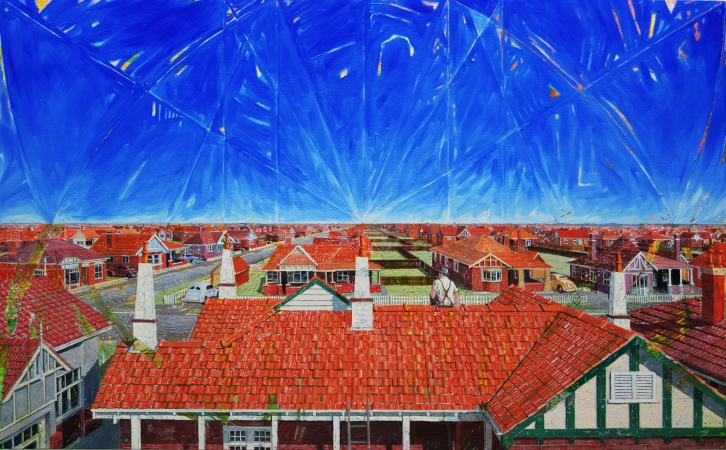 The Stylite of suburbia, oil on canvas, 2010

I made this painting for a solo show called Myth and Memory in 2010 about my own memories as well as my discoveries in literature and art that have had an impact on my life and reside in the memories and myths that have shaped my life. The work was purchased by a Sydney writer.

In 1964 expatriate the Australian author George Johnston published his ground breaking novel My Brother Jack which set out the life of an Australian boy, David Meredith, who made the journey from Melbourne’s inner city working class streets, to the comfortable existence of a successful middle class professional man in a new suburb, and onto an impoverished but relatively enriched life of an artist and a bohemian, living on a Greek island with his family and often famous, or soon to be famous friends. The book was semi-autobiographical. Many instances have been traced by scholars and acquaintances to be fairly faithful accounts of actual occurrences in Johnston’s life. Others, like this are loosely based on things that the author had lived.

Born in Melbourne in 1912, by the late 30’s he was a successful journalist, married and living in a new middle class suburb surrounded by people with similar life styles, but something was missing and it seemed to dawn on him in a revelation that he had while sitting on his roof on a suburban Sunday morning. He had dutifully fixed an aerial onto his roof for the new consul radio his wife had bought when he rested and looked out across the estate.

“for the first time in weeks I had an odd feeling, not only of being alone and away from everything, but of being in some way unassailable as well…”  he goes on to say-“..my elevation provided me with the first opportunity I had to look out over Beverly Park Gardens Estate, and there was nothing all around me, as far as I could see, but a plain of dull red rooftops in their three forms of pitching and closer to hand the green squares and rectangular lawns intersected by ribbons of asphalt and cement…” he reflects on the people behind the doors of the houses and believes them to be too interested in appearances and probably insincere and hypocritical. He compares them to the downtrodden people in the street where he grew up and concludes that those people from his childhood were probably “a worthier tribe, really, because they still grappled with existence where audacities were possible, and even adventure.”

He reflected on the emptiness of his loveless marriage, his unsatisfying career, and the dull environment that he found himself in and that he now seemed to be seeing for the first time. “I realised with a start of panic that I had got myself into the middle of this red and arid desert, and there was nobody to bring me water “

He likened himself to a “Stylite of the suburbs” – a reference to early Christian ascetics who sat on top of pillars of stone outside towns in Byzantium Syria, meditating, praying and preaching to anybody from the town who would stop and listen. It occurred to him that perhaps the discomfort and concern that people felt about the dangers of modern life, the evils and injustices that they read about in Nazi Germany, Communist Russia and the fascist bombing of Guernica might actually be coming from or fuelled by the deadness and helplessness of their own suburban existences.

In a sad defiant gesture he climbed down the ladder and set off to the nearest nursery to find a Gum Tree to plant in his yard and re-claim a little of what must have been there before the bulldozers had flattened the ground to prepare for the building of The Beverly Park Gardens Estate.  He planted the tree, but by doing so, and as a result of his rooftop revelation, a seed was also planted in him, and that was the idea that he needed to walk away from his safe bourgeois existence and risk everything to be the artist that he always wanted to be. That life took him and his writer wife Charmain Clift to the island Hydra in Greece. It would bring him poverty, illness, criticism and addiction, as well as good times and stimulating discussions in the company (in Johnston’s real life) of poets, artists, actors, musicians and writers; some famous like Peter Finch, Leonard Cohen and Sidney Nolan, who came to Hydra for similar reasons- to work and create among other artists. It would also bring him critical acclaim, prizes, fame and finally some money for writing My Brother Jack, the sequel –Clean Straw for Nothing and the unfinished third part of the trilogy A Cartload of Clay. He returned to a hero’s welcome in Australia in 1964 and died in 1970 at the age of 58 of the Tuberculosis that he had lived with for 20 years.

I gave the picture an unmissable single point perspective to suggest infinity and enormous space. I wanted to imply that there was so much more than the Beverly Park Gardens Estate, that the world was bigger and had infinite possibilities when he could finally see clear of the suburban architecture and manicured gardens. I also deliberately divided the canvas in two. The top half is a sky, but its also a pure flat abstraction. The bottom half is pinned down by the perspective that dominated Western painting from the time of Piero Della Francesca’s Renaissance. The whole painting is proportioned by the Golden Ratio of 1 : 1.618 that was favoured by the ancient architects of Athens and Rome.  Johnston grew up at a time when Modernism posed a serious threat to the tropes of academic painting in Melbourne in the 1930’s. He witnessed it through his young painter friends like Sam Atyeo and Colin Colohan when he took nighttime painting and drawing classes with them in the late 1920’s. He had a foot in both worlds. I think of the painting as being poised between it’s Classical structure and it’s Romantic themes of escape and freedom.