Before going to Art School at 25 I worked in an office for 6 years. I felt entirely unsuited to the work and the closed environment and restrictions of an office.

When I began my teaching career in another Art School I spent most of my time in a large studio, talking to students about their work and preparing lessons for them. The teaching met my financial needs and allowed me some time to make my paintings. I was required to spend one day each week, where I did some paperwork, in my office.

In time the Art School became a University. We were required to get higher degrees and our way of teaching changed. There were reports and courses to be written, forms to be filled in, applications prepared, and staff to supervise and co-ordinate. We were given computers and told how they were “the way we work now”. I found myself spending less time in the studio with my students and even less time in my own studio making my work which was now called “research”. I was back in an office. 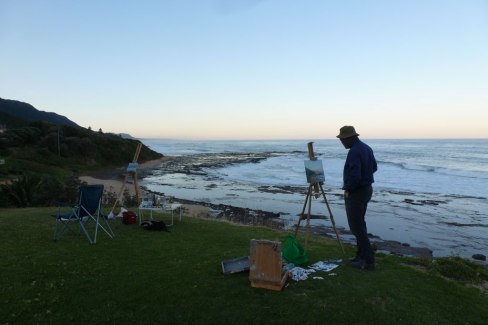 Ten years ago I quit teaching in the University. I was finally free to make my paintings again. I always knew that making Art in the real world was very different to the proposal driven institutionalised activity that happened in universities. It was like starting again and I felt the need to get back to basics.  I loved painting. It was the reason I went to Art School in the first place and now that I was out of that environment, I wanted to paint in what I thought was the most elemental form i.e. to sit in a place, look at a subject, and try to render those three dimensional forms and the experience of being there in that place, with those sensations, and the feelings I experienced, onto a two dimensional surface with paint. That meant being something that most university academics would scoff at. That meant being a “plein air Painter”, but at least I wouldn’t be in an office.

Plein Air painting is a fairly recent development in Western Art history. It began around 1770 coincidentally at the same time as Europeans sailed up and mapped the East Coast of Australia for the first time. One Hundred years later the Impressionists were breaking up the colours on the surface of their Plein Air paintings to try to capture the optical effects of light and Plein Air painting became an international Avant Garde movement for a few decades with leaders like Monet, Cezanne and Van Gough. These people are arguably the most famous and most popular artists of all time. By the time I went to Art School in the late 1970’s Plein Air painting was laughably out of fashion and I’m sure it still would be in some artistic circles. I want to say more about this in future Blog Posts but for now I’d like to show some of the offices I’ve worked in the past ten years.

I live in the Blue Mountains but like most people I am drawn to water. In a little over an hour I can drive to Sydney Harbour where there are still some bushy private places where I can sit and paint without too many disturbances and try to give justice to some pretty spectacular vistas. It is not without good reason that people often say that Sydney Harbour is perhaps the finest harbour in the world. It is essentially a sunken canyon of an ancient river system where, since the last melting of the polar ice caps, the hill tops have become spur-like headlands that jut into the harbour from all sides catching the light and giving colour and form. These headlands are made of ancient eroded sandstone and covered on Banksias, Gums and, best of all, Angophoras.

When sitting and painting in the bushier areas it doesn’t take long before you see Water Dragons and Bush Turkeys. There are many other birds and wildlife checking you out if you sit still for long enough; I even saw a sea-lion basking in the shallows in front of me one day.

Sydney is still a port but many of the bigger ships now go to Port Botany to the South. That is not to say that it isn’t a very busy water way. There are many craft from the smallest dinghy to massive white Cruise Ships which pass close to the headlands loaded with cheering party goers and loud intrusive pop music blasting out and temporarily ruining the peace. When the Cruise ships have passed out through the heads the harbour returns to its busy, but dignified state of beauty and grace.

There are many people on or around the harbour and I feel its presence gives a collective sense of appreciation and shared goodwill to those who walk around its shores or navigate its surface. People often smile and wave perhaps in appreciation of the mutual good fortune of just being there on a sunny day or under a glowing pink sky at dusk. 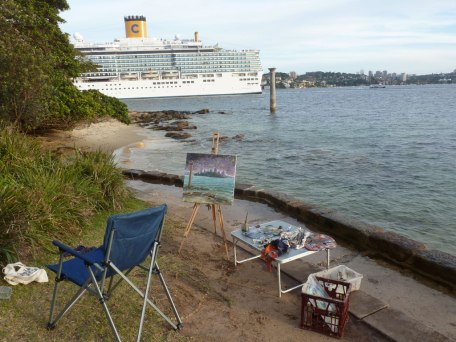 This feeling has a sense of eternity and it was there in the 1890’s when painters like Streeton and Roberts captured it so well with their “Australian Impressionist” paintings at Little Sirius Cove in their Bohemian Days at Camp Curlew. It was also there in the 1930’s when Slessor wrote his famous poem Five Bells which captures the beauty and mystery of Sydney Harbour when filtered through memory.

I’ve made many paintings around Sydney Harbour and I hope to make many more soon. There are still places to discover and Google Earth will be used again to find them. 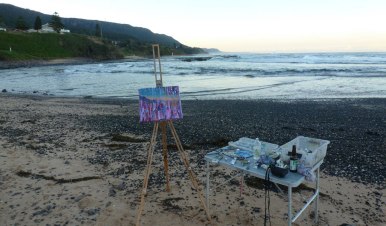 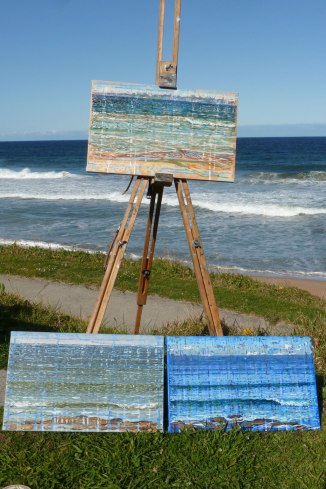 When I was a teenager I started surfing and quickly became obsessed with it. For ten years I surfed every weekend and every holiday until I began to paint and gradually switched my obsession for the brush. I think I learned a lot about waves and how they change a beach with their constant motion and transference of energy. I learned about their beauty and their power. I learned a respect for the sea and an understanding that they can bring awe and terror one day and shimmering translucent beauty on another. I observed the tides and noticed the changes that wind can bring to the forms and light can bring to the colour.  I realised that a wave embodied the idea of constant change, constant becoming and destruction. I learned later that 2500 years ago a Greek philosopher Heraclitus had spoken and written about constant change in nature. He is credited with saying- “No man ever steps in the same river twice”, in reference to the folly of thinking of something as permanent. 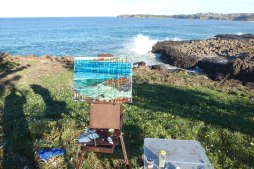 These are some of the reasons why I’ve painted so many waves and been to so many beaches, rock platforms and headlands to work. 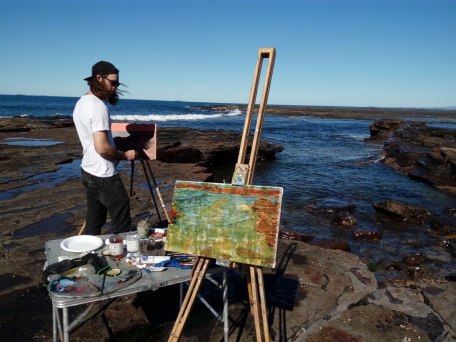 There can be a great comradery between artists who collectively take the time and trouble to travel to a certain place and, each in their own distinctive way, document a landscape by plein air painting. This has happened since the practice of painting on location was invented when artists from Europe’s colder countries would travel for weeks to work in the warmer, lighter Mediterranean climates of Southern France and Italy. 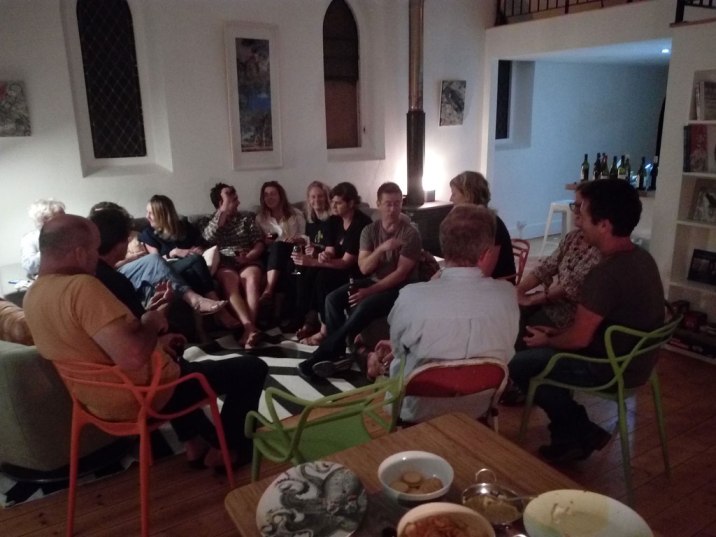 I’ve been fortunate in finding a group of dedicated professional artists who love painting on location and enjoy the inevitable evenings of eating (artists are often great cooks), conversation (usually about the relative merits of other artist’s work, galleries, and the trials and tribulations of surviving in the “artworld”) and of course- drinking (most artists also love a drink). We meet two or three times each year at a destination where one of the group may act as a host or just thinks that it would have plenty of interest for the group. Apart from my sessions on the eastern Coast of NSW here are some of the places we have worked in the past five years- Flinders Ranges in South Australia, Kelton Plain near Cooma, Gardens of Stone near The Blue Mountains, Goldsmith Island off the Queensland coast near McKay, New England Region in New South Wales, Mafra and the Snowy Mountains in Southern NSW. My office is a lot more interesting theses days.