Here are a few thoughts and observations about Art and Nature and how they relate to my painting. Many of these ideas will echo and add to some of the issues in my other blog posts.

For me, the landscape that I stand in when I paint should be honoured. I should try to actually say something about the conditions and the forms that I see in front of me. That means light, colour, texture, and form should represent a degree of truth. It doesn’t however mean that there should be a strict optical copying of the subject like a photograph, we’ve got cameras for that. I try to go beyond surface appearance of the subject but stop short of relying on the usual tropes of abstract painting to make “art” or “good painting”, meaning approved decorative and identifiable styles that are so favoured in the art market. That means that I try to show what I know about nature and my subject, what lies under the surface and sometimes what it might resemble in a conscious or even unconscious way.

I recently made a series of works based on Cape Banks which is a small headland near La Perouse just south of Sydney. The jagged cliffs and headlands of the Cape and surrounding sections of coast are  Hawkesbury Sandstone which was laid down in a massive freshwater river basin during the Triassic period approximately 500 to 700 million years ago. It was subjected to shifts in the substrata that broke, bent and exposed it over the many years that it existed as sedimentary rock. In its very recent geological history it was subject to the most recent sea level rise around 15,000 years ago where the weathered spurs and hills of Sydney’s meandering river valleys were flooded. Harbours and bays replaced rivers and the coast was flooded and submerged by the melting icecaps and rising Pacific with its relentless beating waves. The headlands of the coast around Sydney are steep and high. They seem to be temporary to me, like they could fall into the ocean at any time. They also appear ancient and resilient like warriors withstanding powerful forces. In reality they are both it just depends on what time scale they are measured by.

The sea, wind, salt and sun weather the sandstone into beautiful and often fantastic shapes in the caves, ledges and hollows they leave. Some layers are more resistant to change than others because they contain different sand deposits. Here are some of the shapes that attracted me in the Cape Banks series. 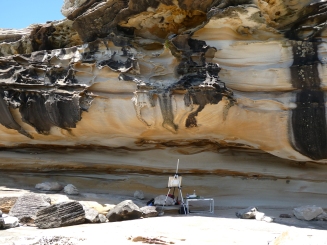 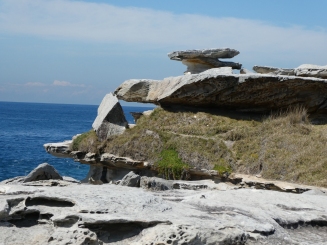 They range from massive brutal jutting cliff faces to delicate lacy filigrees of stone. They can look anthropomorphic, beast like, geometric, and sexual, or even like folded drapes at times. They are far more interesting than anything that human beings can ever make. To me they strike a balance between order and chaos that is not only visually satisfying but endlessly fascinating. They are in flux, works in progress, and they always will be. They demand close inspection and careful artistic consideration if a painter is to try to do them justice. These are some of the reasons why I believe Art  should always be at the service of Nature. 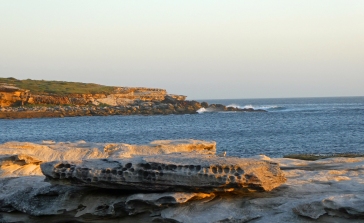 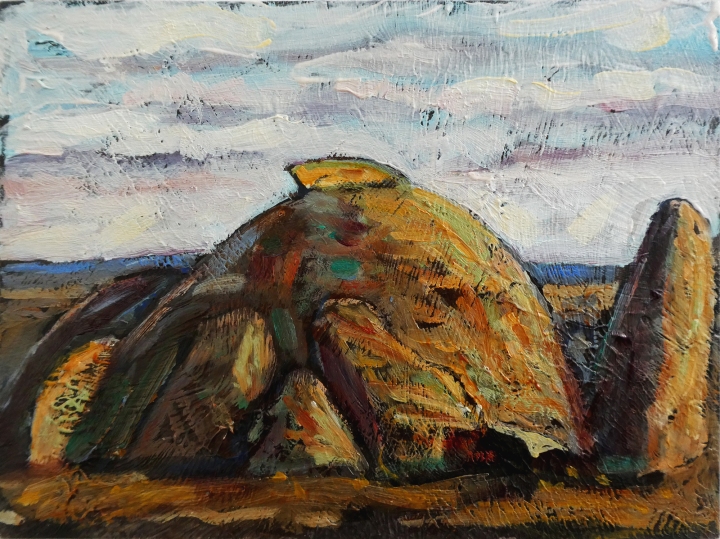 I grew up in a semi-rural village in the outskirts of Western Sydney. Our place had three acres of paddock with scrub and bush around the edge and a river nearby. I spent my formative years playing in that bushland. Sometimes, when I am going to sleep I close my eyes and recall every inch of that environment, every rise and fall of the paddock and the hills that surrounded it, the creek, the anthills, the old irrigation trenches from when it was a farm and every tree. I knew those trees, they were like companions in my childhood and I can still visualise them now.

Trees are obviously living things and they complement and have formed human existence. We have lost the ability to see them for what they are and treat them as a commodity only. I sometimes think that people lost something when they moved away from Animist beliefs and started to create gods in human forms; big Daddies that are supposes to look over us. Most religions have creation myths that put in story form the separation of “Man” from “Nature” as if they are two different things.

When I paint a tree or trees, I try to remember that it’s a living thing that is experiencing the same sun, rain, hot, cold, drought that people experience. I sometimes anthropomorphise them to accentuate that, but also to amuse myself and to give my picture rhythm and an interesting composition. I don’t find all trees to be interesting subject matter. I am drawn to the ones that are familiar to me in some way. I like the ones that have thick limbs and odd shapes. I like forests that have some space around the trunks of the trees. I particularly like the Angophoras that grow around Greater Sydney. They have smooth bark that comes in many colours, branches that look like arms and legs, lumps and bumps that resemble buttocks and breasts, and thick twisting trunks. 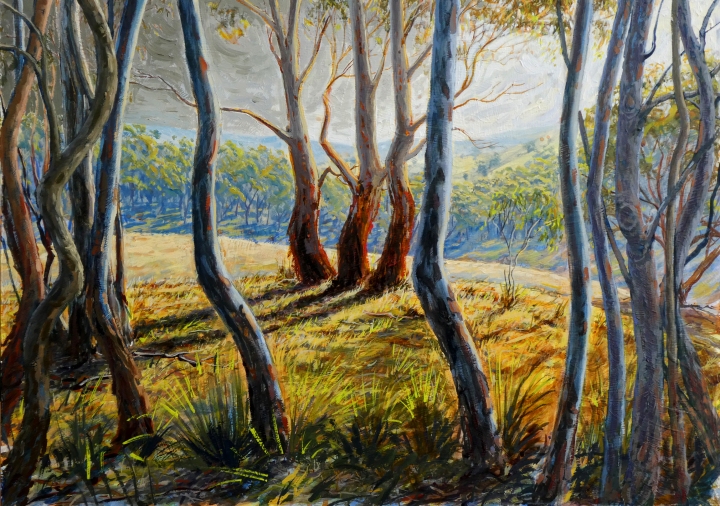 I live at the edge of a forest in the Blue Mountains that spans to the south uninterrupted by houses or settlements for almost 200 kilometres. The small village where I live is surrounded by bush on all sides. Trees are our constant companions and we live and interact in a shared space.

I set out to make a series of paintings that celebrated this primal relationship we have with trees. Every forest is different. Some are pleasant shady welcoming places that invite you to explore. The light inside these places is sometimes reminiscent of a Gothic cathedral, especially the rain forest in the Megalong Valley of the Blue Mountains that features in some of these works. Some forests are impenetrable harsh places that are challenging and formidable, even threatening.

As a painter, one of my first considerations in selecting a subject is its formal possibilities. What potential does it offer me for colour, composition, light and tone while being true to the particulars of the place? I hope these abstract or formal values play a role in communicating my experience of being there to a viewer in a gallery.

The Memory of Trees- I can close my eyes and recall individual trees and the patches of forest and creek banks I played in as a kid. I dream of those places and those trees nightly. They have been etched into my memory for life. I remember trees but do trees remember us? We certainly affect trees every day. We have cut them down in every place we have ever lived since we invented a stone axe. We have changed so much of our environment by doing so and now it seems we are reaping the grim reward of our actions.

Half way through painting this series I had a bushfire burn into my property and scorch the trees to black. The whole nation has been traumatised by the worst fire season on record with the hottest average temperatures on record. I’m now painting the new growth in my backyard, the new hope that maybe we might have learnt something about respecting trees and other lifeforms. That we are actually a part of something, not apart from, and above everything.

I was a very keen surfer in my youth. When a surfer paddles out through the waves to get to a good take off position there is a moment where the oncoming wave builds and stands up to its full height to become a glassy wall that hovers momentarily before crashing forward and turning into white foam as it slides towards the shore. That is a moment of transformation. That wave will never be the same again. In fact, waves are constantly transforming themselves from the ripples that begin as the wind passes over the surface way out to sea; to the collective sets that, in favourable conditions, arrange themselves in rows and roll onto the beaches and headlands and provide the surfers with free, natural energy to ride and delight. Those waves also transform the landscape by eroding the beaches that other more gentle waves laid down the previous summer. They undermine the headlands and take them back into the oceans over the millennia. They also carried the sand and rocks and laid them down to create more rock for future times. The waves are agents of change and they make visible the very forces that create our natural environment.

As an artist who is interested in time, and change those waves are the perfect metaphor for Heraclites pronunciation “You cannot step into the same river twice”.